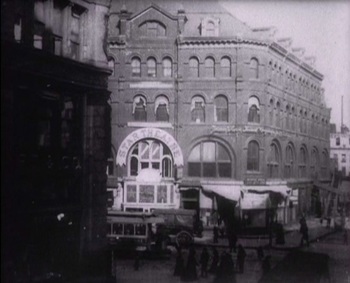 Star Theatre, aka Demolishing and Building up the Star Theatre, is a 1901 short film (two minutes!) directed by F.S. Armitage.

This early film shows the demolition of a theater in New York. The Star Theater at 844 Broadway had been one of New York's leading playhouses since 1861. When it came time to tear the theater down, Armitage placed a camera at a fixed location about a half a block away. Over a period of thirty days, he photographed the complete demolition of the theater. This film is one of the earliest ever uses of Time Lapse photography.

The site is currently occupied by an apartment building