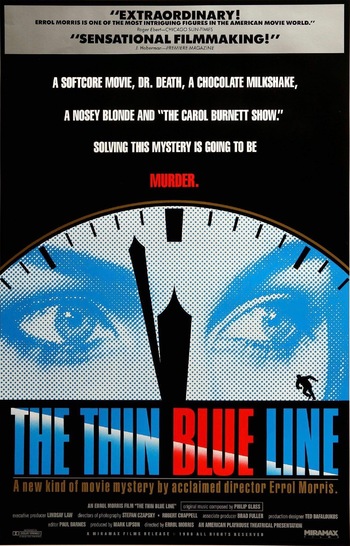 The Thin Blue Line is a 1988 American documentary film by Errol Morris, depicting the story of Randall Dale Adams, a man convicted and sentenced to death for a murder he did not commit. Adams' case was reviewed and he was released from prison approximately a year after the film's release.

The film argues that David Harris, who Adams was with that evening, actually committed the murder, while the justice system conspired to convict Adams for the crime due to his outsider status as well as his age (Adams was nearly thirty, while Harris was still a teenager). Unlike other documentaries, the film eschews voice-overs and text, instead relying almost completely on talking head interviews and re-enactions of the murder, in effect letting the evidence speak for itself.

The film has been lauded since its release, and is considered by many critics to be among the greatest documentaries ever made.

Not to be confused with the BBC sitcom of the same name, or The Thin Red Line.