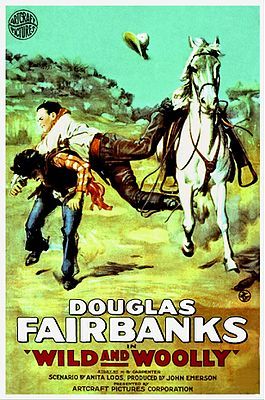 Wild and Woolly is a 1917 directed by John Emerson, starring Douglas Fairbanks.

Jeff Hillington (Fairbanks) is the son of a rich New York railroad magnate. Jeff is a grown man (his age is not mentioned but Fairbanks was 34) who has a childlike obsession with The Wild West. He has his fancy apartment rigged up like a wild west scene, complete with tipi. He rides around Central Park on horseback, dressed as a cowboy. He lassos his butler.

Jeff's father has no idea what to do with his wastrel son, but fate intervenes when the citizens of Bitter Spurs, Arizona, approach Mr. Hillington about a railroad spur that they would like to be built to facilitate development in their town. Mr. Hillington, eager to give his son a taste of the West and eager to get him out of the office, sends Jeff out to Arizona to scout out the deal.

Bitter Spurs is as modern as any other American small town in 1917. However, when the locals find out about the rich New York goofball, they elect to dress themselves up as a Wild West town, putting on old-timey clothes, changing the signage, and staging a fake shootout and a fake train robbery to keep Jeff entertained. Nell, the hotel owner's pretty young daughter, participates in the setup but starts to fall for Jeff for real.

Meanwhile, Steve Shelby, the corrupt Indian agent, learns that the government is coming to examine his books. Faced with the need to get out of town, evil Steve comes up with an idea: use the fake train robbery as the perfect pretext to make a real train robbery.