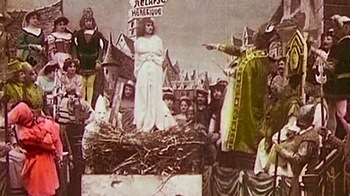 It's a Downer Ending
Advertisement:

It is the story of the Maid of Orleans, French heroine of The Hundred Years War. In ten minutes the film manages to hit the high points of Joan of Arc's life, including:

This ten-minute film was, believe it or not, unusually long for films of the day, and featured elaborate costumes and sets that were more typical of stage shows than experimental early cinema. It was something of a step forward for Méliès, who before this had mostly made "trick" films in which he used the camera to show seemingly impossible stunts and magic tricks.

Joan Of Arc contains examples of: