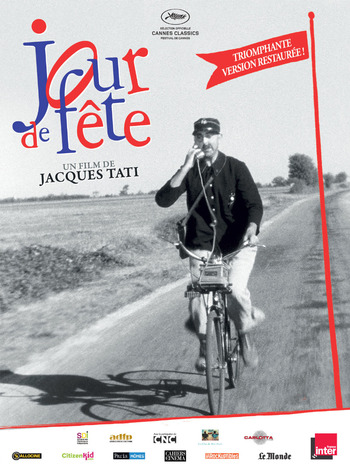 Jour de fête ("The Big Day") is a 1949 film directed by, written by, and starring Jacques Tati.

It was shot in the village of Sainte-Sévère-sur-Indre, where Tati in Real Life lived during the Nazi occupation of France. In the movie, it's carnival day, as a traveling fair (not much more than a merry-go-round and a movie projection booth) has arrived in the sleepy village. The protagonist is Francois (Tati), the bumbling, ineffectual mailman. The villagers and the carnies both make fun of the slow-witted Francois. When the carnival's theatre shows a newsreel about lightning-fast American mailmen, the villagers make fun of Francois, who pokes around the village on a bicycle. Offended, Francois resolves to deliver the mail as fast as he can, in the American style.

Jacques Tati's first feature film. Shot in an experimental color format that Tati proved unable to process, forcing the release of a black-and-white print; the color version was finally restored and released in the 1990s.