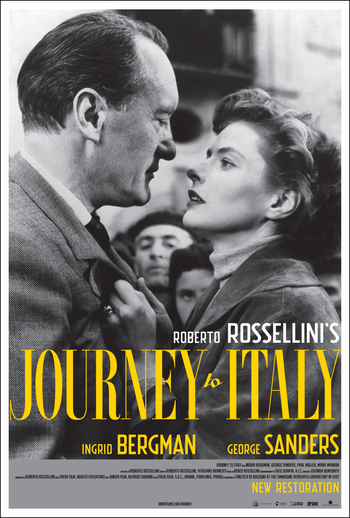 Journey to Italy, aka Voyage to Italy, is a 1954 film directed by Roberto Rossellini.

Despite being an Italian production the film is in English. Alex and Katherine Joyce (George Sanders and Ingrid Bergman) are a wealthy husband and wife who have journeyed to Naples to sell a house that Alex has recently inherited from his deceased Uncle Homer. The couple, who are spending an extended period of time together for the first time in a while, suddenly discover that they don't like each other very much. The vacation soon descends into angry sniping and tension. Alex seizes on a transparent excuse to take the ferry to Capri, supposedly to sell the house but really to party, while a lonely Katherine tours the attractions of Naples and Pompeii (the Fontanelle cemetery, the Phlegraean Fields, and the Naples Museum are promintently featured). Meanwhile, their marriage deteriorates.

One of the films Bergman made with Rossellini during her exile from Hollywood caused by the very Serious Business of the two of them having an affair when both were married to other people (though Rossellini was separated at the time).