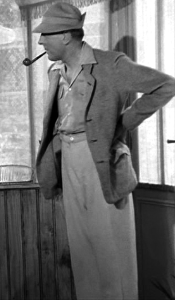 Mr. Hulot's Holiday (or Les Vacances de M. Hulot) is a 1953 French comedy film written by, directed by, and starring Jacques Tati. It's largely a light-hearted physical comedy that pokes fun at the way people act while on holiday at a seaside hotel, with various character types and minimal dialogue.

The film is notable for the first appearance of Tati's trademark character, Monsieur Hulot, who went on to appear in three subsequent films. Hulot was a sympathetic everyman, a kind gentleman, but slightly shy, naive and bumbling, who tended to accidentally and unknowingly create chaos around himself. Along with being very tall and thin, he frequently had a recognizable hat, pipe, raincoat and umbrella, and walked with a strange gait. The Hulot character would be one of the major inspirations behind Mr. Bean, The Illusionist (2010), and several Monty Python's Flying Circus sketches, with the Grand Finale of the former, Mr. Bean's Holiday, even being a loose remake of this film.