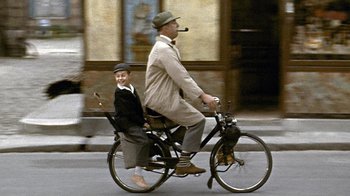 Mon Oncle (My Uncle) is a 1958 film by Jacques Tati. This film stars Tati in his second appearance as Monsieur Hulot (previously seen in 1953's Mr. Hulot's Holiday). The film won the 1958 Oscar for best foreign language film and was also honored at Cannes.

The film generally focuses on quiet humorous events rather than outrageous slapstick. There is little dialog and scenes move slowly with a tendency to Leave the Camera Running.

The overall theme of the film is the contrast between the vibrant life of Monsieur Hulot in his old Paris neighborhood and the bland life of his sister and brother-in-law, Madame and Monsieur Arpel, in the modern suburb that they live and work in. The Arpel's son Gerard loves to travel to the older part of the city with his uncle, but his parents see Monsieur Hulot as a bad influence. The plot of the film is a loose collection of scenes showing Monsieur Hulot's life as his sister and her husband interfere, trying to make him more respectable by getting him a job at the plastic factory and attempting to marry him to their neighbor.