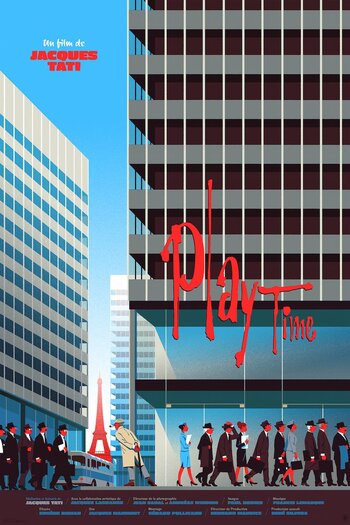 It is the third of four films in which Tati played his signature character of Monsieur Hulot, following Mr. Hulot's Holiday and Mon Oncle. Here he expanded on his previous style and created a film with a greater scope than ever. It tells no cohesive story but is a set of loosely-connected vignettes, with a sort of running theme about the alienation and anomie created by modern life and technology.

M. Hulot is visiting a steel-and-glass office tower somewhere in a very ultra-modern, antiseptic Paris that looks very different from the old Paris that he knows and loves. He has a meeting with a man in the office tower, but he misses his meeting, gets lost, and spends much of the movie wandering around the bewildering office mazes.

Meanwhile, a young American woman named Barbara is part of a tour group mostly comprising other, older American women. The group seems to be spending a lot of its time in this decidedly un-scenic part of Paris, visiting a trade fair with many new household gadgets on display, even as Barbara would much prefer to see more of Hulot's old Paris. Eventually Hulot and Barbara meet up at a brand new upscale restaurant that is having a lot of difficulties on its opening night.

To make this film Tati borrowed a whole bunch of money and built enormous sets—namely, everything in the movie: the buildings, the airport set, the glass-walled apartments, the streets— in a gigantic complex called "Tativille". He took three years and spent 17 million francs. The film failed at the box office and Tati lost everything, including his production company, the rights to his movies, and his own home. His career as a director was effectively derailed for the rest of his life. It is, however, still hailed by critics as his masterpiece.