Film / I pugni in tasca 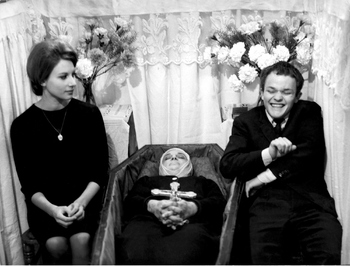 I pugni in tasca (English title: Fists in the Pocket) is the 1965 debut film by Marco Bellocchio. A classic of Italian underground cinema, it is a precursor to many other works in the spirit of the contestazione (contestation).

The film describes a family led by the blind mother. She has four children (three boys and a girl), the eldest of whom is a working person and the rest three are barely functional. They live in a big house but mostly don't know what to do with their free time abusing one another.

Once the second brother decides that the eldest brother who can lead a normal life should be liberated from all of them, himself included because they are unable to do anything. The film follows his attempts to achieve this goal as well as occasional half-hearted attempts to still somehow adapt to the surrounding life.

This movie is a perfect choice as the second item for the double feature with Dillinger è morto.

Alternative Title(s): Fists In The Pocket