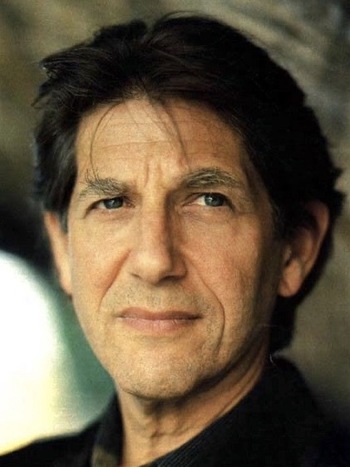 When he's not acting, you may find him donating wolf preserves.
"People call me a movie star. If you're in the business, a movie star is someone who can make a film bankable. My name and $6 million will make a $6 million movie. I'm a working actor. Because I started late, I had a very short run as a leading man, and my films didn't make money in America."
Advertisement:

Next to Stacy Keach, Peter Coyote (born Robert Peter Cohon; October 10, 1941 in New York City, New York) is arguably the best-known American voice narrator of his generation. His mellow tones are often compared with those of Henry Fonda.

Before becoming an actor at the age of 39, he spent 15 years as a member of the Diggers

and counterculture rebel during The '60s. He wrote a memoir of that time

called Sleeping Where I Fall.

It was not until 1982 that he landed a big-time role — playing the 'good' scientist, Keys, in Steven Spielberg's E.T. the Extra-Terrestrial. He then found himself in high demand in Hollywood, but seemed ill-fit for a leading man. Later, Coyote was cast as the overzealous prosecutor in Jagged Edge (1985) and finally seemed to have found his niche: that of the antagonist who may be right.

Beginning in The '80s, Coyote began doing voice-overs, which has led to a very successful side venture, now numbering over 120 films. He continues to lend his voice to narrations for commercials and documentaries (including many a Ken Burns production, like The Vietnam War), and often donates his voice to films that support issues close to his heart.