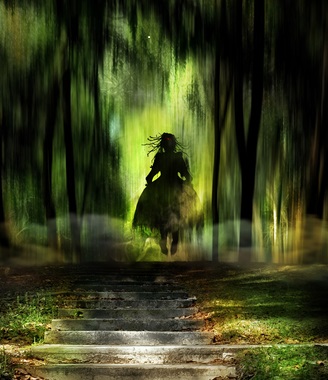 You'll never hear her coming.
"Am I goin' crazy, or are her feet not touchin' the ground?"
— Applejack, My Little Pony: Equestria Girls – Legend of Everfree
Advertisement:

The simplest trick in horror is to make something natural act in a way that isn't. Ghosts can usually fly, walk through walls, disappear, and so on. But one need not invoke the whole suite of supernatural effects to achieve unsettling ends. Sometimes, a more subtle approach can achieve truly disquieting effects.

A Ghostly Glide is when a character gets around by less than ambulatory means. The trope is usually invoked in one of two ways. Sometimes, fluid movement gives a character the appearance of floating, meant to highlight the character's grace and beauty. More often, however, it creates an unsettling effect. In most cases, the floating is clearly a sign of supernatural influence.

Compare Power Floats, which is when the floating is done as a show of power, rather than to disquiet, though the two can overlap. A good rule of thumb is if it looks like the director put the character on a skateboard and then pulled the character across the screen, that's a Ghostly Glide. If a menacing character hangs in midair, that's Power Floats. Can be paired with Marionette Motion if the character in question is under the control of others. Compare Flash Step.

In the hallway leading to the morgue, some nuns eerily "walk" past Ernest.

In the hallway leading to the morgue, some nuns eerily "walk" past Ernest.