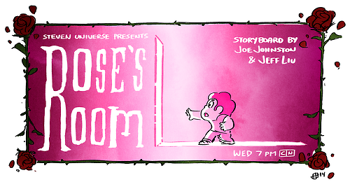 The episode begins with Steven finishing off a can of creamed corn. The Gems walk in from the temple door, and Steven excitedly tells them that he has eaten four cans of creamed corn due to there being a five dollar coupon for mini-golf because he wants to go with them. Unfortunately, the Gems have to leave on a mission and cannot hang out with Steven.

He decides to play Golf Quest Mini to pass the time and ends up beating the final boss. Just as the Gems return from their mission, Steven reaches a secret ending cutscene in the game. The Gems unintentionally distract Steven while he is watching the video (Amethyst blocking his view, Garnet showing him an ancient object they found called the Wailing Stone, and Pearl explaining what it does).

Amethyst presses the button on the Wailing Stone which produces a deafening sound wave and causes Steven's TV to break. Pearl deactivates it and then proceeds to scold Amethyst, but Amethyst claims that Steven loved the Wailing Stone.

As they yell, Steven vents his frustration of not being able to control anything in his life (not getting to play his mini-golf game, not seeing the secret ending, not being able to stop going to the bathroom after eating all the cans of creamed corn). Steven then says that he wishes for a place just for himself; at this, his gem glows and activates the door to his mother's room.

The Gems tell him not to go inside, but he runs in yelling at them about never wanting to do what he wants and claims that he has a place where he is going and that the Gems were not allowed to come. The door to the room seals and disappears, locking the Gems out. Steven then proceeds to explore his mother's room. When he notes the lack of a bed, one appears out of nowhere. He realizes the room could give him anything he asks for, after asking for a quadruple bunk-bed with a slide and a tiny floating whale. Steven then asks to watch the secret ending of his game without being interrupted.

When he steps out into Beach City, he sees it's night and hardly anyone is on the streets. At the Big Donut, he finds Lars and Sadie standing side by side smiling and staring at him creepily. The two are unnaturally still and unresponsive. When they do talk, they speak stilted dialogue in unison. Steven asks for one doughnut but is given a bag of three. Lars and Sadie then slide away toward the back of the store, Steven gives chase and exits the Big Donut through the back door and sees Sadie and Lars have disappeared, he finds Onion standing under a streetlight. He offers him a doughnut, but Onion only moves his eyes. Steven puts it on top of his hair and departs.

Steven walks down the boardwalk wondering where everyone is. He passes Beach Citywalk Fries, does a double-take, and sees Frybo in the window, who offers him fries. Steven, assuming that it is Peedee, attempts to talk to him, but Frybo keeps putting fries through each other in exactly the same spot, as if on a loop. Steven gets spooked and leaves to look around some more.

He walks around Beach City Funland, passing the rides, and stopping in front of the arcade. Meat Beat Mania instantly turns on, which shocks Steven. He runs towards the beach and sees Connie looking out at the ocean. He's surprised to see her because she's supposed to be out of town. He looks down and sees that the water seems to be looping (only barely touching her boots) and asks her what's happening. Connie turns around and is stuck on a repeat of saying "He was incredible!" exactly the way she said it in "Bubble Buddies". Steven turns around and sees all the citizens of Beach City, with their faces drastically simplified. Steven again runs away, but not before seeing Lion, not moving, also with a changed face.

The ground turns into water and he falls through, ending up at his dad's car wash. Mr. Universe comes outside and Steven is relieved to see someone acting like their usual self. Everything finally seems normal again as Steven shares doughnuts with his dad and explains how he is sorry that he yelled at the Gems and is just feeling left behind. Greg comforts Steven with some words of wisdom. However, when Steven wonders about the current state of Beach City, Greg starts reciting ill-suited platitudes. Steven realizes something is still wrong. He tries to bite into the doughnut, but it disappears. He then comes to the conclusion that he has been in the room this whole time.

Upon his realization, Beach City and everything in it starts disappearing in large chunks. He runs up the cliff overlooking the town but falls into oblivion as everything disappears, where Steven whimpers that he does not want this. The Tiny Floating whale reappears and asks him what he does want in a serene voice, to which he concludes that he wants to be back with the Gems.

Steven finally falls out of the room and lands on Garnet back in the house. Steven tests if it's really her by chomping on her forearm. Garnet responds with "ow", and Amethyst joyously follows with chomping on Pearl's arm who shrieks in pain. Steven recounts that the room tried to recreate a whole town to the astounded Gems. Pearl states that this is beyond its capability, and expresses relief for Steven's well being. Steven apologizes for snapping at them earlier, revealing that he now understands that he can't get everything he wants all the time. The Gems apologize as well, but the four of them go mini-golfing with their newly acquired free time (Garnet even wears Greg's golf pants.) The episode ends with Steven exclaiming he "always gets what he wants", before the usual cut to black.