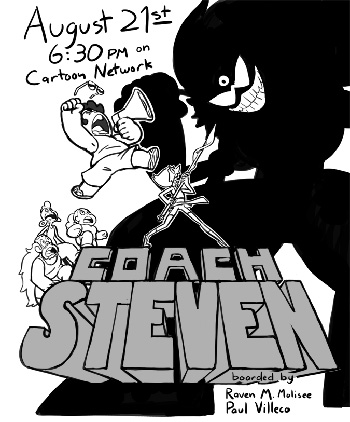 The episode opens with the Gems warping into a new environment full of crystal towers. Pearl explains that before it fell into disrepair, it used to be a communication hub for gem-kind, but now it’s emitting bursts of electromagnetic interference. Steven doesn’t understand, but Garnet translates to layperson:

This of course upsets Steven and he races forward to try to destroy the crystals. Amethyst teasingly takes Steven’s form (but megabuff, all purple, with a cutout in her shirt where Steven’s star belongs, so her gem shows), and begins punching the crystals. Steven is delighted by this, but all her effort manages to only knock off a comparatively tiny chip. Pearl begins to whip up a hologram to detail another of her plans, but Garnet says all they need is Sugilite.

Amethyst responds to this suggestion with enthusiastic glee, but Pearl hedges, saying that Garnet and Amethyst can be a little unstable when they fuse. She suggests Garnet fuse with her instead, indicating they should be careful.

Garnet begins the Fusion Dance with Amethyst. It’s a lot funkier (and a bit more suggestive) than the one Pearl and Amethyst did, so Pearl covers Steven’s eyes. But of course, he wants to see.

The dance completes, and in a burst of Gem magic, Sugilite appears — she’s enormous, buff, and scary — with sharp pointed teeth. And she’s very happy to be back. She shows off a little for Steven, combining Amethyst’s thorn whip and Garnet’s battle gauntlets into a two-fisted wrecking ball. Sugilite turns her attention to wrecking the crystal towers, disregarding the concerns voiced by Pearl. Crystal chunks begin flying behind Sugilite. When one hits Steven and knocks him down, Pearl decides enough is enough. She picks up the youngest gem and warps home with him (just in time, as the next chunk is huge and lands on the warp pad, destroying it).

Steven goes to the Big Donut, all bandaged up. Sadie shows concern until Steven reveals that his battle injury is only a tiny little scratch. Lars mocks Steven and tells him to toughen up, even as he struggles with opening a jar. Sadie opens it instead, and Steven gets the idea of setting up a gym for them to work out at so Lars will be able to cope if Sadie is not around, and so Steven can be strong like Amethyst!Steven or Sugilite.

Steven tries to get Pearl interested in the idea. She finds it amusing until Steven mentions he wants to be like Sugilite, at which point her smile fades. As Steven, Greg, Sadie and Lars begin to work out on Greg’s pitifully makeshift equipment, Pearl begins tidying up the house and sings of her dismay that Steven looks up to Sugilite and the brute strength she displays; and emphasizing that there's more than one way to be strong, even though Steven refers to brute strength as "the real way". Steven hears part of it, where Pearl sings of wanting to be an inspiration and uses that to pump up his father and friends.

The next day, the others are ready to work out again, but Steven is so sore he can hardly move. Garnet and Amethyst haven’t returned, and the warp pad isn’t working. Pearl is worried about the other two gems.

The ground begins shaking. Everyone looks up and sees a massive figure wading toward shore: Sugilite has returned, and she is not happy: she feels like Pearl abandoned her. Pearl tries to explain she was concerned for Steven’s safety and that the massive Fusion Gem didn't need any help. She suggests that Sugilite drop the fusion so they can all relax, but Sugilite refuses and begins stomping the “gym equipment”. A fight ensues, and the giant Fusion Gem seems to make short work of Pearl. Defeated and injured, covered in scratches, Pearl is ready to give up but Steven, who can barely move from soreness and being knocked around the beach, makes his way to the megaphone and gives her a pep talk. Pearl struggles to her feet again, smack talks Sugilite into chasing her up the hill, and tricks Sugilite into falling off the cliff beside the temple. The fall does nothing but further irritate Sugilite — but her two-fisted wrecking ball conks her in the head. This forcibly ends the Gem Fusion, leaving Garnet and Amethyst lying weak and spent on the beach, as Sugilite also takes a toll on their bodies.

Pearl hugs her teammates, but encouraged by her victory over the musclebound and savage Sugilite, she no longer wants to relax. She’s ready to undertake a mission! But Amethyst and Garnet are too weak to even move. And Steven is ready to continue working out.

Cue the many Iris Outs.

Pearl stops herself from rhyming at one point during "Strong In the Real Way".

Pearl stops herself from rhyming at one point during "Strong In the Real Way".