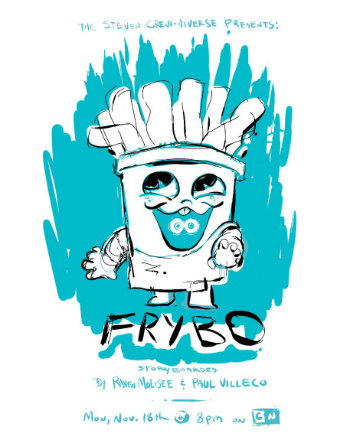 Steven is searching for his pants when Pearl comes in, searching for a Gem Shard. She warns Steven that the shard is dangerous and can possess clothing garments, turning them into violent living entities. Steven is distracted by his missing pants and hears little of her explanation. She tells him to be on the lookout for the Gem Shard and heads out to search the town.After Pearl leaves, Steven finds his pants walking on their own, exclaiming "That's unusual!" and chases after his pants throughout the house. Eventually, Steven catches his pants after tackling them, puts them on, and finds one of the gem shards Pearl is looking for inside a pocket. Steven then leaves the temple in search of Pearl to give her the gem shard.

While looking for Pearl, Steven is startled by Peedee Fryman wearing a "Frybo" character mascot costume being attacked by seagulls mistaking him as fries. After chasing away the seagulls, Peedee's dad, Mr. Fryman, comes out of his shop and tells Peedee that he is doing a mediocre job at being part of the Fryman business. After his dad goes back inside the shop, Peedee tells Steven that he just wants to help his dad without wearing the costume, and Steven gets an idea: to wear the costume himself. However, this idea backfires when the seagulls come back and attack Steven while he is wearing the costume, also mistaking him for fries.

Steven eventually takes off the damaged costume. He comes up with the idea to use a gem shard to make Frybo come to life. This plan succeeds; Frybo is repaired and listens to Steven's every command. When Steven tells Frybo to do a little dance, Frybo grows legs made out of fries and dances. Mr. Fryman then comes out and tells Frybo (not knowing Peedee is not inside the costume) that he is doing a good job.

Once Mr. Fryman returns to the store, Peedee claims that he is free, and tells Frybo that it got the job and to shake on it. Frybo takes this literally and physically shakes Peedee when it is supposed to shake his hand. After it let goes of him, Peedee tells Frybo to make people eat fries and plans to go be kids with Steven as they run off to Funland. As Steven and Peedee ride Jelly Jiggler and Tsunami respectively, Peedee becomes depressed and realizes riding the seahorse is not as satisfying as it used to be.Later the two hear screaming from the Fry Shop and run to see what's going on. They discover that Frybo took Peedee's earlier command literally and is now using his fry tentacles to force feed people fries. Mr. Fryman, believing that it is still Peedee inside the costume, tries to reason with him and apologizes for being tough on him. Frybo responds by trying to force feed Mr. Fryman his own fries then throwing him out the window on top of the boys. Eventually, Pearl arrives and asks Steven if he put the shard into the costume. Pearl summons her spear and throws it into Frybo's eye resulting in an eruption of ketchup and mustard. The stream of condiments catches Pearl in the face, blinding her and causing her to drop the other gem shards.

While Peedee rushes to his father, Frybo emerges from the fry shop with Pearl's weapon protruding from its eye. Peedee stands between Frybo and his father and tries to defend him by swinging a broken wooden plank at Frybo. In the process, he reveals his true feelings about always hating Frybo just as his dad regains consciousness. Frybo then disarms Peedee, who falls back into his father's arms as Mr. Fryman tries to shield him from the approaching Frybo. Steven's pants are seen leaping onto Frybo and kicking him. Steven has taken all of his clothes off and used each of the shards to bring them to life. Steven commands his clothes to attack Frybo as he tries to remove Frybo's shard but fails.

Steven exclaims that he "didn't want to do this, but you (Frybo) leave me no choice." His underwear then flies off and attacks Frybo along with the rest of his clothing. Together, they are finally able to subdue Frybo long enough for Steven to reach into its cheese-filled mouth and rip out the gem shard, reverting Frybo to an inanimate costume.

The scene transfers to the beach, where the Fryman mascot is given a Viking funeral (the costume is sent out into the ocean on a flaming fishing boat). Peedee asks if his dad wants to get another costume. His dad replies he does not need another Frybo because he has Peedee. Steven, still naked, heroically states that their mission is complete. Pearl chides him to put his clothes back on.

We Iris Out over the star on Steven's shirt.