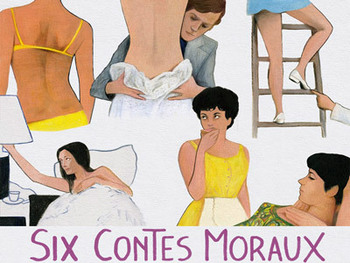 When it is told, this story seems very banal. I hope I shall enrich it with a few nuances, because it's time for nuances, don't you think?—Éric Rohmer, at the end of his initial story outline for The Bakery Girl of Monceau.
Advertisement:

Six Moral Tales (French: Six contes moraux) is a Thematic Series of films (a 20-minute short film, a 50-minute featurette, and four feature length films) written and directed by French director Éric Rohmer that became his Breakthrough Hits in the world of cinema.

Originally conceived as a collection of short stories written around 1950, Rohmer decided to group them all together once he realized that all the stories shared the same basic structure: a man is on the verge of committing to a relationship with a woman, only to be tempted by another, more intriguing woman.

Made by Les Films du Losange, the production company started by Rohmer and fellow French New Wave filmmaker Barbet Schroeder (who also acted as producer), the films started out as No Budget, spartan affairs, featuring a largely Amateur Cast. As Rohmer’s acclaim grew, he managed to attract big-name stars and shifted to filming in picturesque locations, but the films retained a certain DIY ethic, and established Rohmer’s unique style of Speech-centric Slice of Life Dramedy .

Since Rohmer was a film critic and scholar, he was well-aware of the common Love Tropes in movies, and in many ways used this series to deconstruct and subvert them.

Tropes common to all six Moral Tales include: