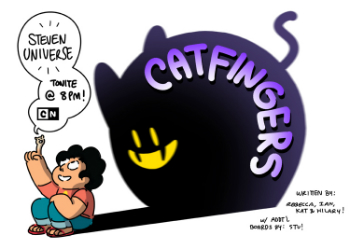 When Steven finds out that all the Crystal Gems have the ability to shapeshift, he tries to shapeshift himself, but fails. A few tries later, he manages to change one finger into a cat.

After having fun with his finger-cat, Steven then makes the rest of his fingers cats. Then Body Horror ensues.

With the other gems gone to battle a living island, he resorts to asking his dad for help. They figure out that the cat-heads hate water and manage to eliminate them by bathing Steven in the car wash.

After the events of "Cat Fingers", Steven is inspired to crack a few "cat jokes"

After the events of "Cat Fingers", Steven is inspired to crack a few "cat jokes"