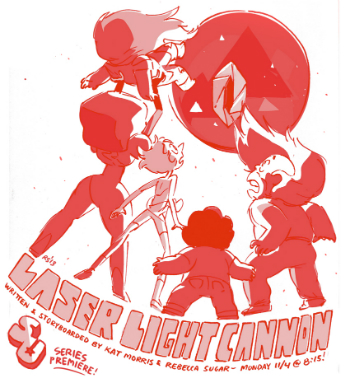 Steven and Amethyst are just walking out of Beach Citywalk Fries when Steven comments on the second sun setting. It is a large gem-like "Red Eye", so large it looks like a second sun in the sky. The Red Eye is falling towards the city, threatening to destroy it. The other Gems try to smash it but fail. They lament that they don't know where Rose Quartz's Light Cannon is, as it would be really helpful against the threat. Steven guesses that his father might know, but the gems dismiss the possibility because Steven's dad is not the most together person. Still, Steven goes to see him.

We learn that Greg Universe lives in his van and that he stays out of Steven's life because the Gems want him to stay away from the "magic stuff." He admits he doesn't know what Rose saw in him, though there's a sweet bit of reminiscing on how they met and were always together until Steven was born. The cannon is located in a shed packed so tight with old stuff only Steven is able to crawl inside and find it. Father and son lift the heavy weapon into a toy wagon, tie it to the back of the van, and drive it to the beach. Sentimental Steven puts on his dad's CD and sings along, to Greg's amazement and surprise.

They reach the beach with the cannon just as the Eye is close enough to start pulling things towards it (presumably with its gravity) but nobody knows how to activate it! Then Steven repeats his father's Catchphrase to cheer him up ("If every pork chop were perfect, we wouldn't have hot dogs"). This turns out to be the codeword that Rose chose to activate the cannon. It fires, emitting a pink beam that resembles Rose herself, shatters the Eye, and saves the city, though pieces of it fall all around town.

The sea waves grow and land near where the guys and girls were. Greg's van is also swept in the crashing waves as well. The episode ends with Steven and his dad trying to rescue the van.

We Iris Out onto Greg's ocean swept van.