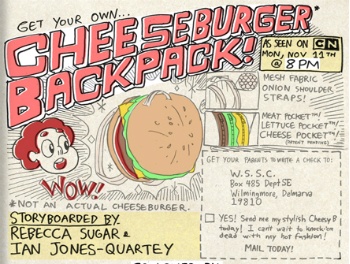 'Cheeseburger Backpack' is the third episode of Steven Universe, first airing on November 11, 2013.

Steven unwraps his package he received from Jamie the mailman to reveal it's a Cheeseburger Backpack. The Gems are not as excited, but Steven promises that he can bring all sorts of useful supplies with him in the backpack, so he'll be helpful on missions. The Gems are willing to let him give it a try since their next mission is to restore the Sea Spire, an old Gem landmark, by returning a moon idol to its proper place there.

Steven rushes to pack until the Gems call him back down. They warp to the location of the temple and run up on several obstacles. The first one is defeated by Steven tying together a bunch of shirts he brought for warmth and using them as a rappelling line. The second obstacle is bunch of razor-sharp crystal shrimp. Pearl uses her gemstone to project a hologram of her plan, but Steven upstages her by throwing bagel sandwich treats that the shrimp immediately pounce on. The third obstacle is a water hazard. Steven has an inflatable raft for that one, but it doesn't work, and Garnet makes do by knocking down a column to use as a bridge.

The time comes to place the idol on the pedestal, and ... oh, no! Steven has forgotten the idol. All he has is the talking "Mr. Queasy" doll. They're more or less the same size and weight, so after asking Garnet if it will work (she shrugs and gives an "I dunno" murmur), they try it. It doesn't work, and the Sea Spire falls apart around them.

Steven feels terrible about having failed the mission, but Amethyst points out how awesome all the other stuff he brought in his Cheeseburger Backpack turned out to be, and how the majority of his packed items were helpful. The raft, which floated away earlier, surfaces, giving the Gems a way home. Even if it is a three-hour paddle.

We Iris Out on Steven offering the gems a soggy bagel.