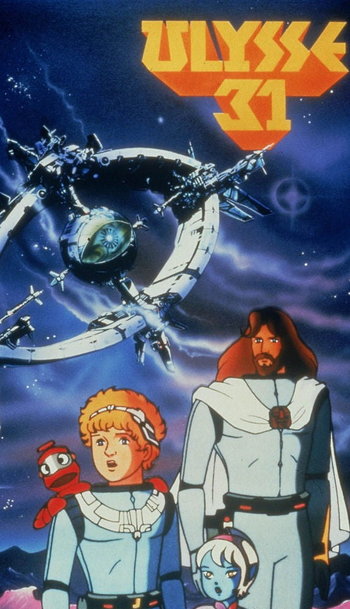 "It is the 31st century. Ulysses killed the giant Cyclops when he rescued the children and his son Telemachus. But the ancient Gods of Olympus are angry and threaten a terrible revenge... "
— Opening Narration
Advertisement:

Ulysses 31 (French: Ulysse 31; Japanese: 宇宙伝説ユリシーズ31, Space Legend Ulysses 31) is a 1981 French-Japanese anime series conceptualized and written by Jean Chalopin (who went on to create The Mysterious Cities of Gold and Inspector Gadget in the following years) and Nina Wolmark, and co-produced by Tokyo Movie Shinsha studios and DiC Entertainmentnote with further animation work outsourced to Nakamura Productions, Wang Film Productions, Studio Live and Araki Productions, with backgrounds by Studio Jack, all uncredited under the supervision of Bernard Deyriès. As the name implies, it is based on Homer's The Odyssey and heavily borrows plot elements from it as well as various plot elements and characters from other famous Greek myths.

In the 31st century (hence "31" in the title), spaceship commander Ulysses flies home from a galactic conflict he helped end peacefully on the planet Troy. On the way back to Earth, he rescues his son Telemachus and two young Zotrians, Yumi and Numinor, from a Human Sacrifice by destroying the Cyclops, but doing so angers Poseidon and the other gods who rule the universe of Olympus, from which it came. Zeus curses Ulysses by dragging Ulysses' ship, the Odysseus, through into Olympus, putting his crew and Numinor in suspended animation, and erasing the ship's memory files that contain Earth's location.

Ulysses will now have to wander throughout unknown worlds in the galaxy of Olympus and face various threats and dangerous traps set by the gods until he finds the Kingdom of Hades, at which point his crew will be revived and he will be allowed to travel back to Earth. He is accompanied in his journey by the only two persons who were not put in suspended animation, his pre-teen son Telemachus and Yumi, a blue-skinned alien little girl with telepathic powers. Nono, the small red toy robot Ulysses offered to Telemachus, also accompanies them.

The series is an unusual product of international collaboration, that is still right now rather unique in its quality (there was a two-week delay for episode production, instead of the standard one-week; the French team was almost entirely made of professional illustrators, which forced the Japanese animation team to actually simplify the graphics, but also gave them enough inspiration to go much farther than what they were used to). A second season was planned but ultimately cancelled.

The Odysseus was originally planned to be animated by computer, but the single wireframe model generated was still too complex to render for the machines of the times. So, the only computer animation left is the opening credits.