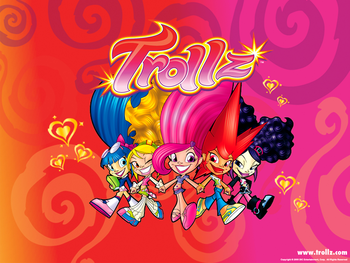 Trollz is an American animated television series created by DiC Entertainment and produced by Andy Heyward in 2005, loosely based on the Troll Dolls toyline. The show revolves around five young Troll girls, each with different personalities—Amethyst (a total sweetheart), Ruby (a willful leader), Sapphire (a studious brainiac), Topaz (a ditzy fashionista) and Onyx (a snarky goth).

While the girls are certainly different from each other in many ways, they're also BFFLs ("Best Friends for Life"). Together, they fight evil with The Power of Friendship, try to impress cute boys, and get their homework done, all while learning about the magic in the world they live in.

The girls are displayed in public.

Magic of the Five!

The girls are displayed in public.

Magic of the Five!