Note: This article is a stub. If you could add more information to it, that'd be great. 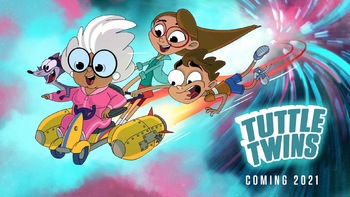 "The cartoon that can literally change the world" Note  From left to right: Derek, Grandma Gabby, Emily, and Ethan.
Advertisement:

Tuttle Twins is a crowdfunded Edutainment Show based on the book series created by Conner Boyack, who is also the show's executive producer.

Tuttle Twins focuses on the lives of Ethan and Emily, two young siblings who go on crazy time-traveling adventures with their grandmother and her pet raccoon. Along the way, they rediscover American History and learn important values; such as economics, freedom, and individual rights.

According to showrunner Daniel Harmon, the staff's goal is to capture the educational aspects of The Magic School Bus while making the show as humorous as Phineas and Ferb, Gravity Falls, and The Simpsons.

Their crowdfunding page can be found here.