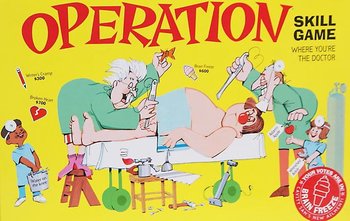 "Is it water on the knee? OPERATION!"
Operation is a board game from Hasbro (albeit originally from Milton Bradley in 1965), developed by John Spinello in 1964. The game is supposed to test a player's eye-hand coordination and fine motor skills. The game board depicts the patient, Cavity Sam, on the operating table with holes that are filled with pun-oriented ailments made of plastic that need to be removed. In order to cure the patient, the player must use the tweezers attached to the board and retrieve the pieces from their holes. If the player hits the metal edges on the board, the patient's red nose will light up and buzz, thus making it the next player's turn.
Advertisement:

Ever since its release in 1965, the game has spawned various renditions and versions based off franchises.