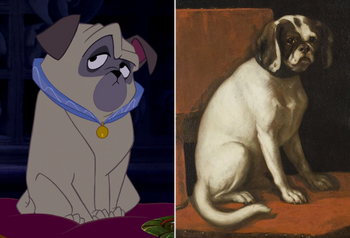 In Period Pieces, animals that didn't exist during that period will often exist either way. Animals that looked different in the past will also appear in modern form for similar reasons.

This is often done due to ignorance. Animals are mistaken for older than they actually are and thus are shown before they existed. This can also be done for recognizability; people will recognize a Bloodhound but not its now extinct ancestor, the Talbot Hound.

In live-action, this trope might be used for pragmatic reasons. It's more expensive and difficult to find period-accurate animals, assuming they aren't outright extinct.

Animals that are treated as anachronistic in-universe (thanks to Time Travel, Lost World or Not So Extinct) are not this trope.