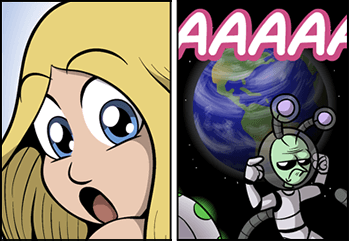 Edvard Munch would have loved that.
"A good many dramatic situations begin with screaming."
— Barbarella
Advertisement:

A character finds something out, sees something frightening, or has something utterly horrible happen to them, and, as a result, they scream.

There's a variety of ways in which this can be shown; the common factor is that a character screams.

Almost universally a comedic trope, though it can be Played for Drama as well.

See also Big "NO!", Howl of Sorrow, Skyward Scream, Scream Discretion Shot, Death Wail, Screams Like a Little Girl, Overly Long Scream, Screaming Woman, and Distant Reaction Shot for the non-scream version of the cut. Say My Name can be screamed in dramatic moments. Sometimes overlaps with Atomic F-Bomb or leads to a Heroic Blue Screen of Death. Not to Be Confused with And I Must Scream. If this is done in music, it may be a case of Metal Scream, Careful with That Axe, and/or Harsh Vocals.

Generally a Discredited Trope from overuse and narm: more modern media created after The Noughties or The New '10s will usually have the Big "NO!", or the Screaming Woman, or some other screaming trope if it's intended to be fairly kid-friendly, or an Atomic F-Bomb / Cluster F-Bomb alone or combined with the previous if it's aimed at older audiences.