Literature / Boots Who Made the Princess Say 'That's a Story!' 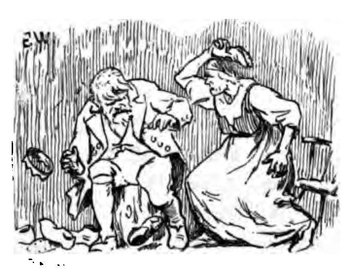 Boots Who Made the Princess Say, That's a Story is a Norwegian Fairy Tale collected by Asbjørnsen and Moe.

A princess lied all the time. The king declared that whoever got her to say of a tale, "That's a story" would have her to wife and half the kingdom. Many people tried. Three brothers tried, and the first two failed, and the youngest, Boots, began. They trade fantastic stories about the size of their farms:

"You haven't such a fine farm-yard as ours, I'll be bound; for when two shepherds stand, one at each end of it, and blow their ram's horns, the one can't hear the other."
"Haven't we though!" answered Boots; "ours is far bigger; for when a cow begins to go with calf at one end of it, she doesn't get to the other end before the time to drop her calf is come."

Boots tells an enormous Tall Tale about an adventure, and concludes that he found the king cobbling shoes, and his mother boxed the king on the ears.

Advertisement:
"That's a story!" said the Princess; "my father never did any such thing in all his born days!"
So Boots got the Princess to wife, and half the kingdom besides.