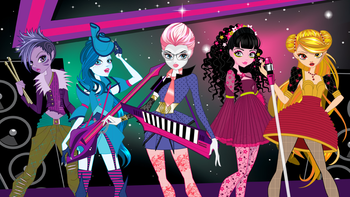 SpacePOP is a cartoon made by Genius Brands International and produced by Andy Heyward, formerly of DiC Entertainment. Every episode is about three minutes long, along with a music video and occasional extras. The series is comprised of 108 episodes.

The show follows five space princesses, Athena, Luna, Rhea, Hera, and Juno, as their home planets are taken over by the evil Empress Geela and their parents are imprisoned. Working underground, the girls form the band SpacePOP and join the resistance to undermine Geela's rule, rescue their parents, and defeat her.

Besides the show, dolls, lifestyle apps, and other merchandise were made with an emphasis on mobile devices and an almost entirely digital marketing campaign, though books and DVDs of the series also exist.

All episodes can be found here