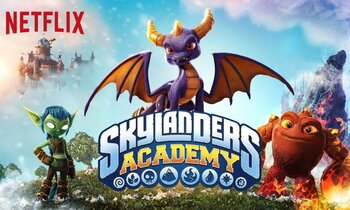 "We're all together, in harmony..."
Advertisement:

Skylanders Academy is a French computer-animated spin-off television series based on the Skylanders franchise. It serves as Activision Blizzard Studios' first animated production with Futurama writer Eric Rogers overseeing the creation of the series. The series premiered on October 28, 2016 worldwide on Netflix.

The television series is completely separate from the storyline of the games with no direct tie-ins to sequels, being its own separate continuity. It is however canon to the Skylanders franchise. Word of God mentioned the series being a mixture of Gravity Falls and Futurama.

As darkness begins to threaten the balance of peace in the Skylands, Master Eon is forced to assemble a ragtag group of heroes to protect the universe from evil-doers Kaos and the Doom Raiders. Using their unique blend of personalities and elemental-based super powers, Spyro and his fellow Skylanders are called upon to set aside egos as they come together to maintain harmony and balance in the land. Jam-packed with humor, heart and memorable moments, Skylanders Academy promises to keep viewers on the edge of their seats with epic action for kids of all ages.

The show ran for three seasons from 2016 to 2018 before getting cancelled.

Now has a recap page that needs love.