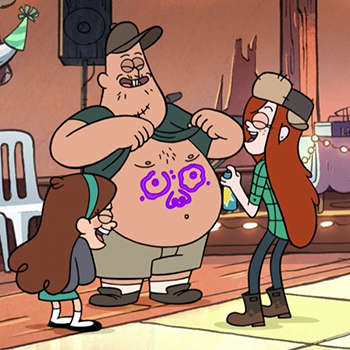 "Y'know, kid: for a dumbass, you got heart."
— Malcolm in the Middle

There are many characters who are dumb or airheaded. However, for some of these, what they lack in intelligence, they make it up with compassion and altruism. The Kindhearted Simpleton isn't the sharpest tool in the shed, but is always well-meaning and compassionate towards other characters. Probably will not be quite as dumb as a standard Ditz or as airheaded as a Cloudcuckoolander, since that is not the focus of their character. If the Brainless Beauty isn't being an Alpha Bitch, then she (or he) is this instead.

Due to their well-meaning nature but below-average intelligence, these characters have the potential to be taken advantage of and manipulated by smarter (and occasionally evil) characters, just enough to also serve as an Sycophantic Servant, an Bumbling Sidekick or even a Minion with an F in Evil in a Vile Villain, Laughable Lackey pairing in some instances. The Kindhearted Simpleton should beware of Manipulative Bastards and Guile Heroes. (They should also know it's a snake when they bring it in.) These characters rarely, if ever, get angry, but when they do, it's usually because someone has taken advantage of their trusting nature one time too many, or has dared to hurt the ones they love. This may occasionally result in the character taking a level in badass, or revealing a hidden badass side, but this type of character is very effective at delivering An Aesop without having to resort to violence, whether it's through a Shut Up, Hannibal! speech, giving the villain his "The Reason You Suck" Speech, or asking a friend What the Hell, Hero?, though they are also just as likely to inform hero and villain that You Are Better Than You Think You Are. But then, the tendency to be large also gives cause to Beware the Nice Ones.

Contrast Insufferable Genius, Mad Scientist, and Insufferable Imbecile. May be a Gentle Giant. Frequently overlaps with the Half-Witted Hillbilly. See also Idiot Hero, Dumb Is Good, Emotions vs. Stoicism (this landing on the "emotions good, logic bad" side) and The Fool (when they are lucky and carefree instead of compassionate). This character is the Nice Moron in a Smart Jerk and Nice Moron pair. Compare and contrast with Loon with a Heart of Gold who may be intelligent but not in his/her right mind.