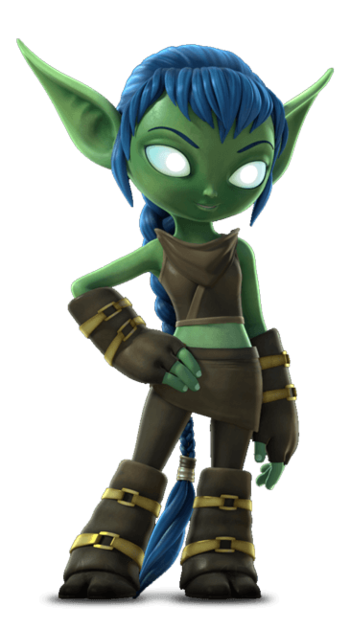 ”And knowing you can do it is the key to hitting your mark."

An elf who’s been friends with Spyro and Eruptor since the day they first enrolled in the academy. Although she appears to not be the social type and more the action type, she still cares for her friends. 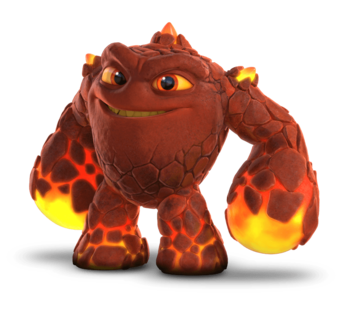 ”I AM NOT GRUMPY! (shoots lava out of his head) That’s, grumpy."

A lava creature with a short temper and high emotional tipping points. Been friends with Spyro and Stealth Elf since they enrolled in the academy together. 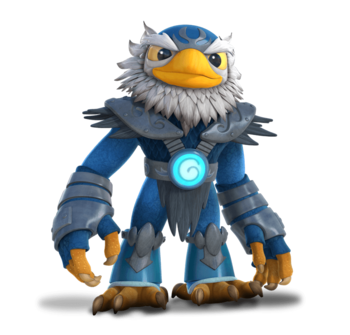 ”It’s high time you learn to do things the Skylander way!"

An eagle-like bird who is one of the eldest Skylanders. He joins up with the three young Skylanders and serves as the team’s leader and engineer. 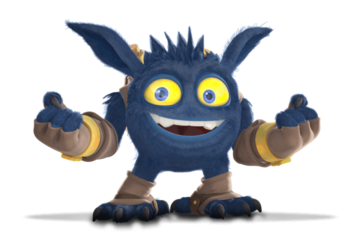 ”Just do what I do whenever I can’t figure something out. Close your eyes and hope for the best!"

A gremlin who is one of the eldest Skylanders. He joins up with the three young Skylanders after revealing himself to have been living in their basement and fights with potions. 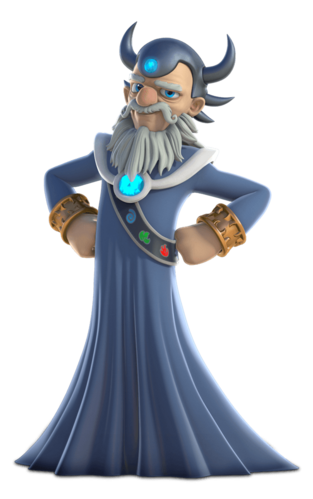 ”Who knows? You may have a more powerful beard than even mine waiting to sprout."

The head of the academy- a powerful sorcerer who attempts to teach the Skylanders life lessons. He has acted as a father figure to Spyro ever since he found the dragon as a hatchling. 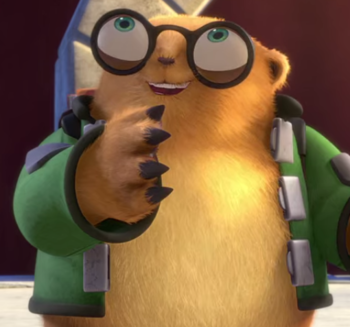 Master Eon's assistant- tends to be either taking notes or suffering from the aftereffects of the plot. 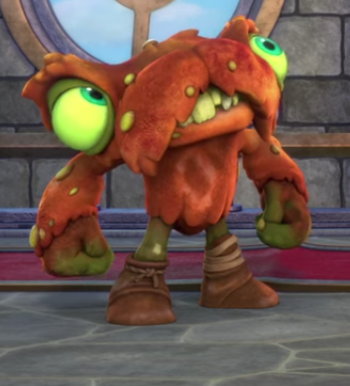 ”Everyone, plug your noses. It’s about to get funky up in here!"

A Skylander with putrid gas. 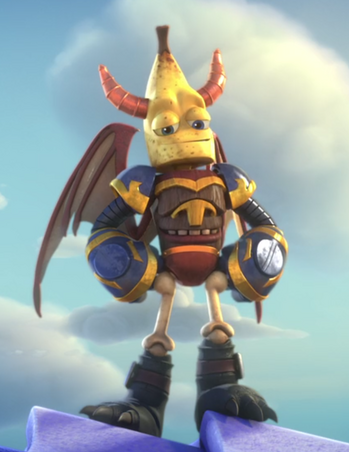 An Imaginator created by the main heroes. 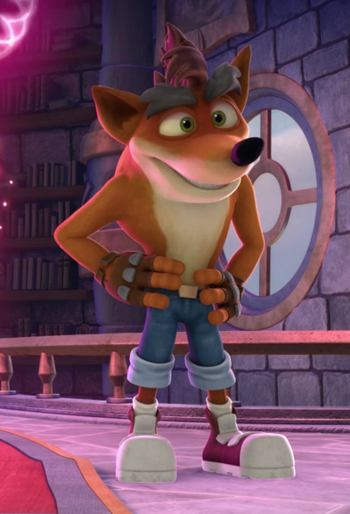 A hero from another world who is accidentally brought into the Skylands. 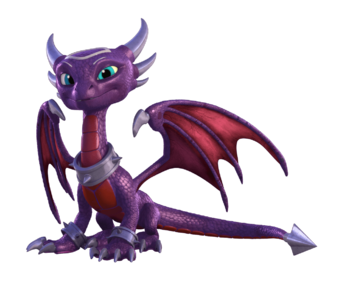 ”If anyone knows about getting a second chance to prove she’s not evil, it’s me."

A new cadet at Skylanders Academy who is the daughter of the evil dragon king Malefor. 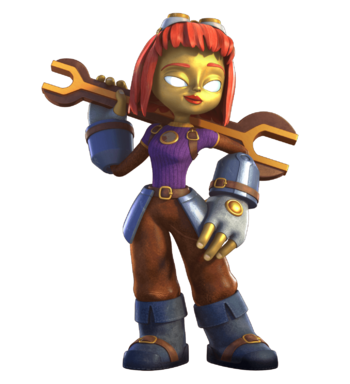 ”That’s why I’m here. To fix the stuff you don’t understand."

A Skylander who specializes in technology. Joins the main team towards the end of Season 2 to replace Spyro after he is taken. 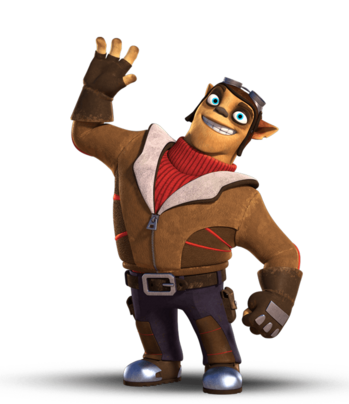 ”No, I planned to do something really heroic and save the day at the last possible moment. Kinda my thing." 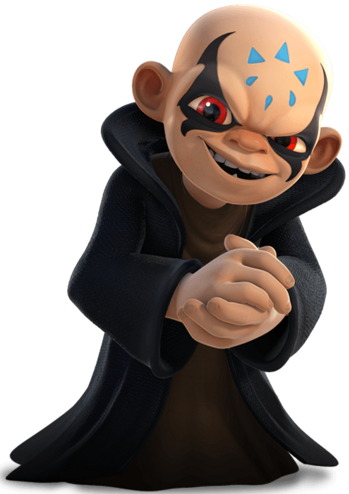 The main antagonist of the series- a dumpy little sorcerer who is forever plotting to destroy the Skylanders and rule over everyone else. 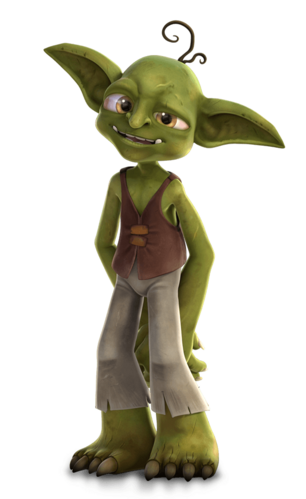 Kaos' Beleaguered Assistant- constantly forced to take the brunt of Kaos' abuse and tries to keep him on the straight and narrow (with little success). 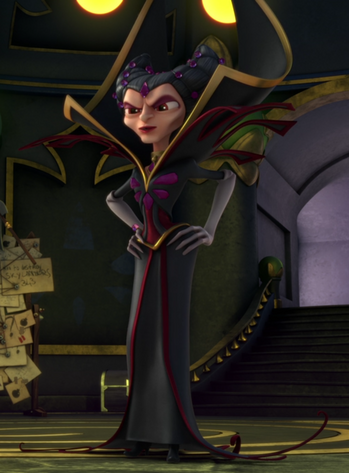 ”When I’m through with my work, you and I are going to have a very long talk about your future in this family. Or lack thereof."

Kaos' mother, a much more competent sorceress. She wants Kaos to stop hanging around his lair all day and go do something else.

Evil dragon king of the Cadaverous Crypts and father of Cynder. 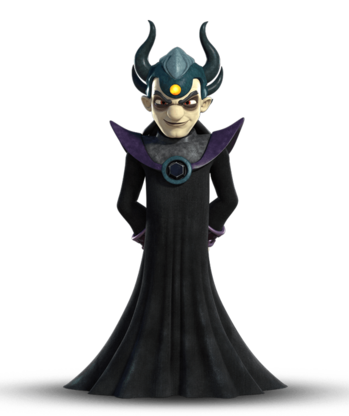 ”I don’t react well to my servants talking back."

Also known as "The Light Eater", Strykore is a dark villain that was previously sealed away by Kaossandra long ago during the time of the Great War. He was later freed at the finale of Season 2 to finish what he started.

The leader of the Doom Raiders, and Kaos' object of affection.

The muscle of the Doom Raiders- a big wolf guy who plays the electric guitar and frequently beats up Kaos.

An evil chef and member of the Doom Raiders.

A Chompy-obsessed sorcerer and member of the Doom Raiders.

Technically a member of the Doom Raiders, but isn't respected at all.

A Doom Raiders member and a defector from the Academy.

A massive fire serpent who is one of the many villains that terrorize Skylands.

A species known for causing mayhem.

A turtle who plants bombs wherever he goes.

A Wilikin with a chainsaw arm with a giant hand on it.

A drow who's known as "The Greatest Ninja Who Ever Lived Ever". He is a famous fighter on fighting show but is also an evildoer.