Characters / Spyro the Dragon (The Character)

The Legendary Purple Dragon. The Savior of the Dragon Kingdom. The bane to Evil Overlords and sheep everywhere.

The titular character, protagonist, and hero of the franchise. Spyro the Dragon is a plucky young Dragon, that, in spite of his short stature, has saved the world from countless evildoers on numerous occasions. He's the purple Dragon, a legendary Dragon species born every ten generations capable of mastering all of the magic elements.

As a Long Runner that has been controlled by numerous companies over the years and has been rebooted twice, Spyro's biography is divided between the various incarnations he has had over the years, those being the three incarnations spread across the Video Game Alternate Continuitiesnote Spyro the Dragon, The Legend of Spyro, and Skylanders, along with the two versions of him that originate from the Skylanders Academy TV Series on Netflix. 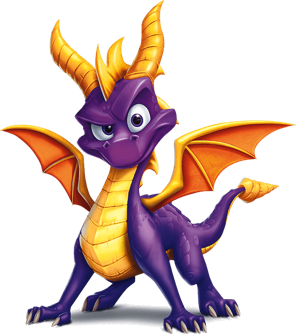 The Purple One himself, a young dragon living in the Dragon Kingdom. Spyro happened to be too small for Gnasty Gnorc to trap in crystal, so he set about rescuing the other dragons from this fate and resolved to torch Gnasty. Following this, Spyro embarked on similar exploits in Avalar and the Forgotten Realms. Spyro is generally stubborn and laidback, though he is perseverant in regards to whatever goal he has. 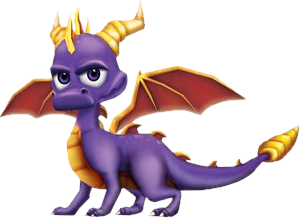 By Dawn of the Dragon: 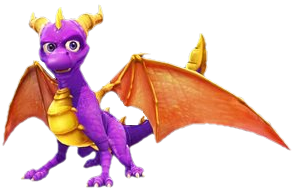 "I know this is not the path you would choose for me, but I have to walk my own path... and do what I know is right."
Voiced by: Elijah Wood (En), Davide Perino (It)

He's still purple, and he's still a dragon, but unlike the original, more "rough" Spyro, this dragon is a bit more polite. He's a rare purple dragon, and one of the only two of his clutch to have survived destruction by the Dark Master. He lives peacefully with his dragonfly family until he suddenly realizes his ability to breathe fire... 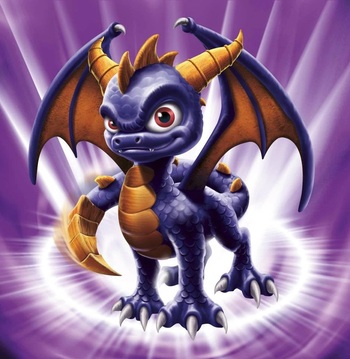 A legendary purple dragon from a faraway land, Spyro is famous for his many adventures — perhaps you've heard of some of them. Having been invited to join the Skylanders, Spyro now protects the Skylands just as fiercely as he has fought evil elsewhere.

As one of many playable characters in the series, rather than the main protagonist, this incarnation of the Spyro character is much less fleshed out than the others. That said, Expanded Universe material (novels, comics, etc.), and later Imaginators, would expand upon this particular incarnation. He’s still as cocky and headstrong (both literally and metaphorically) as ever, but is much more of an Experienced Protagonist than any other incarnation, being The Leader of the Skylanders, along with the fact that he has the best control over his Dark Spyro among the various versions of the character. 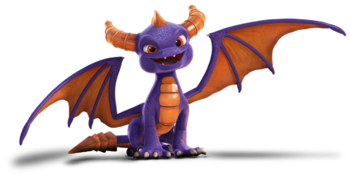 The Protagonist of the Skylanders Academy series. Master Eon's "Chosen One", this cocky hero has a lot to learn in what it means to be a Skylander. 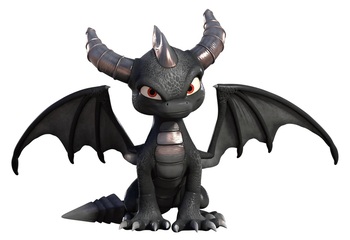 Spyro's Evil Counterpart created when Strykore stripped him of his light.