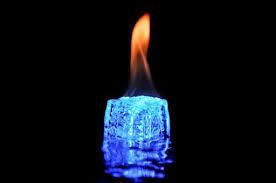 Come in and warm yourself by this roaring ice cube...
"Now it's just you, me, and fire so cold it burns."
—Ultimate Big Chill, Ben 10: Ultimate Alien
Advertisement:

Fire is hot—except for those occasions when it's not. Sometimes, one of the special properties of magical or illusory fire is that it doesn't burn things, although, oddly enough, it may still require fuel. Sometimes, the non-burning property only applies to certain classes of objects, such as fire which doesn't burn people but will burn anything else, or fire which only burns living organisms. Typically the fire in question will be pale blue to indicate that it's cold rather than hot (although blue fire in real life is hotter than normal orange/yellow fire.)

Sometimes, the flames will actually be cold (in varying intensities), and not just not hot (scientifically a flame that's cold wouldn't be flame, but rather a cryogenic vapor that's luminescent, causing it to look like flame).

See also Convection Schmonvection, for when fires supposedly are hot, but don't quite behave like it. This can be a property of Sacred Flames, at least when it comes to dealing with the faithful, though they can just be cool to begin with. Compare Faux Flame, which looks and might even act like fire, but isn't.