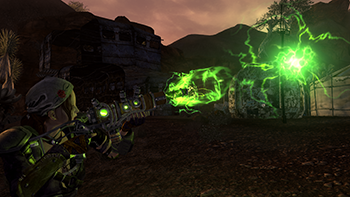 Smell that ozone.
"Phased plasma rifle in the 40-watt range."
— The Terminator
Advertisement:

is one of the four traditionalnote If you're interested, non-traditional ones include stuff like Glass, Liquid Crystal, Degenerate matter and several other more exotic forms. states of matter, a step up from gas where the electrons become so energized that they break free of their orbits. Naturally some people have thought of weaponizing it. Unfortunately, in real life, plasma's properties make it more than a bit impractical. Even without atmosphere, it spreads out and becomes useless more than a fraction of an inch from the source, making it useful as a cutting tool but not a (ranged) weapon unless you can practically project a magnetic bottle to contain the plasma until it hits the target... which is very advanced technology in its own right (and subject to that very same technology being used to disrupt the magnetic bottle of the weapon). Even with atmosphere, the fact that gases are much denser than plasma means that plasma won't penetrate very far through air — think of shooting compressed air underwater. Needless to say, practical ranged plasma weapons are an indication of a highly advanced civilization.

Those impracticalities may be why most fictional plasma weapons, almost always heavy guns or cannons, are at most Cool, but Inefficient. Common traits include:

That being said, one of the major reasons why a civilization displaying practical ranged plasma weapons is so intimidating is because, if practically delivered, plasma has a devastating effect on target. It doesn't merely look cool; it delivers enormous heat and electricity into the target, wreaking havoc on electrical systems (including organic ones, like the human body), outright melting what it hits, and setting everything near it on fire.

A Sub-Trope of Ray Gun and Energy Weapon. When the science fiction setting demands the function of the weapon to be explained, however, it's nearly universally mentioned to be a high-powered relative of Magnetic Weapons instead, the implications being that the projectile's launch energy and/or air friction is sufficient to turn most of it into plasma.