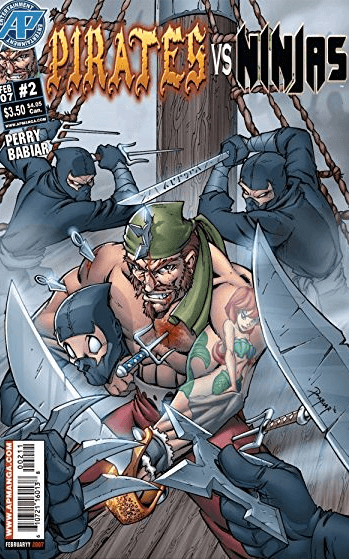 Cheetah Lee: [reading from Bruce's message in a bottle] "Cheetah Lee, you'll never stop me this time. I've combined two ancient enemies into one unstoppable force. XOXOXO, Bruce."
Gordon: He couldn't possibly mean...
Cheetah Lee: Cats and Dogs?
Gordon: No, Bruce tried that one years ago.
Cheetah Lee: Dinosaurs and Laser-Penguins?
Gordon: They disarmed.
Cheetah Lee: So it must be Ninjas...
Gordon: ...and Pirates.
— Ninja the Mission Force, "The Clones of Bruce

Pirates are cool, and so are ninjas, so pirates fighting ninjas must be awesome!

In the nerd fiction of the late noughties and the early New Tens, pirates' most hated enemies usually seemed to be ninjas, and vice-versa. The fact that real life Caribbean pirates and Japanese ninjas didn't even live in the same time period, much less the same hemisphere, is irrelevant thanks to the Rule of Cool. That being said the idea of a ninja/pirate matchup is not really that absurd; while they would have never met a stereotypical Caribbean pirate, ninjas did coexist in the same region and time period with a different stripe of pirate, the Wokou

, and it is not out of the realm of possibility there were conflicts between the two profession. In fact, some bands of ninja actually operated as pirates themselves on the side. Go figure.

Compare also Ninja Pirate Zombie Robot and Elves Versus Dwarves (though the Pirates are more likely to be the Dwarves).

A Sub-Trope of Cool Versus Awesome. May be involved in a Cavemen Versus Astronauts Debate. As noted above, this was a trope largely associated with the internet from around 2007-2012, and is, if not a wholly Discredited Trope today, at least a somewhat dated one, and could be on its way to being a Forgotten Trope.