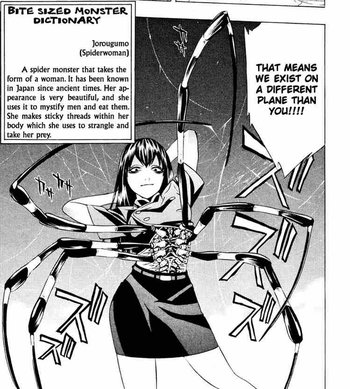 Originally, the tsuchigumo (translated to "earth spider") and their Distaff Counterpart the jorōgumo ("whore spider" or "binding bride") were a term for people who did not show allegiance to the emperor of Japan, describing them as a frumpy people with disproportionately long limbs and living in holes in the ground. As time went on, the satirical caricature would grow more absurd and the racist connotations would be lost to time and soon they became a malevolent monster known for ensnaring humans for mating and food.

These spiders are monstrous in size (as big or bigger than a man), with Oni-like faces (sometimes including Messy Hair), and can take human form to eat travelers. Jorōgumo uses a lure to attract travelers to feed her offspring, and often has the power to allure men with a song not unlike the Enthralling Sirens of Classical Mythology; other times she may act as a Shapeshifting Lover. Tsuchigumo has a powerful, hairy body, and can also use illusions to keep his webs hidden and make people ill in order to feed on them.

In modern pop culture, they commonly manifest as Spider People, possessing the top half of a human and the lower half of a spider. Whether or not they are monstrous predators who would sooner kill you when your back is turned or if they are just misunderstood, differs.

In modern Japanese, o-tsuchigumo also refers to ground-dwelling tarantulas (which are hairy, sturdy and have large faces), and jorōgumo to a number of species including wasp spiders and golden orb-weavers (which are known for their coloration and impressive webs).

Sub-Trope to Spider People and Youkai.