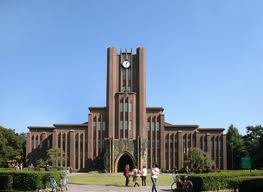 Yasuda Hall, the most recognized building at the University of Tokyo's Hongo campus
Advertisement:

The University of Tokyo (Tokyo Daigaku, often shortened to Todai) is the oldest of the National Universities of Japan, and easily the most prestigious. Considered the nucleus of higher education in the country, Tokyo University has 10 Faculties (this is roughly equivalent to an Academic Department or College in the U.S.) and is spread around five campuses in the Greater Tokyo area. The Other Wiki has a full article about the University here.

Getting accepted to a university is one of the main goals of Japanese high school students, and the majority aspire to be accepted by one of the National Universities. All tertiary schools in Japan base their admissions on competitive entrance exams, Todai's being the hardest to pass. If they did not get accepted (which is most of them, as fewer than 1 in 4 applicants are accepted each year), instead of finding another school to take them in, Japanese students often opt instead to take a year off in their studies, preparing themselves to retake the exam for an indefinite number of times until they pass. These students are called Rōnin, as students without a university to attend are deemed similar to a Samurai without a feudal Lord to serve.

Since Tokyo Is the Center of the Universe in Anime and Manga, Tokyo University serves the purpose of being a university where the main characters in the story study (if they are not Ordinary High School Students anymore), or a school where the Ordinary High-School Student dreams to enter after graduation. Being a student at Todai is also a way to imply that the character is extremely intelligent in their own right, since admission to the university is very stringent.

For the American equivalent, see Ivy League for Everyone. Oxbridge serves the same purpose Todai does in the British Isles.

The University of Tokyo in Japanese Media

The University of Tokyo in other media