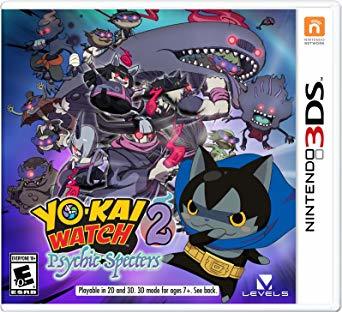 One night two Yo-Kai steal the Yo-Kai Watch from Nate or Katie (the player) along with their memories. After re-buying it from a “Memory Store”, they open a capsule from a nearby Gashapon machine and re-release Whisper, and then reunite with Jibanyan, restoring their memories. From there, the player will deal with day-to-day supernatural phenomena in and out of Springdale, travel through time, discover the origins of the Yo-Kai Watch, and get caught up in a feud between two Yo-Kai gangs.

Three versions of the game were released. The first two are Bony Spirits (JP: Ganso, “Originator”) and Fleshy Souls (Honke, “Head of Family”), which have exclusive Yo-kai and some story differences. The third version, Psychic Specters (Shinuchi, “Headliner”) was released later, which added new post-game content and a new “Psychic Blasters” mode, although some of this content is accessible in the other two versions via free updates.