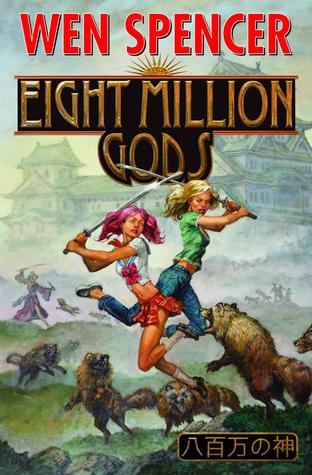 Eight Million Gods is a 2013 novel written by Wen Spencer and published by Baen Books, following a young girl named Nikki Spencer. Nikki is a published novelist with an unusual psychological disorder where she is compelled to write. While hiding in Japan from her mother, a senator who has repeatedly attempted to commit Nikki to an insane asylum "for her own good", Nikki writes the next scene for her book, where an expatriate American is killed messily with a blender, and posts it to her fanpage. Shortly thereafter, a policeman overhears her description of the scene and promptly arrests her for the murder of a man who was killed just the night before in the exact same manner. Nikki faces tanuki assassins, a sinister government organization, and a mysterious deadly man who has a fondness for kittens.