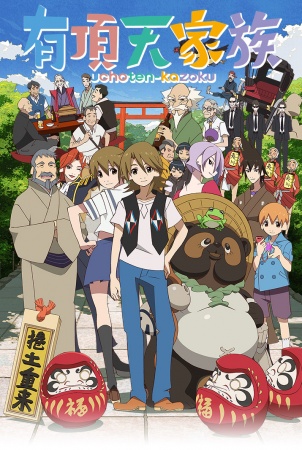 Once, I wrestled with the difficult question of how one should live as a tanuki. I felt I understood how to live an interesting life, but it was unclear what else I should do. And then somewhere along the line, idling my time away doing nothing, I realized that there's nothing else I need to do besides live an interesting life.
—Yasaburou Shimogamo
Advertisement:

In a supernatural version of the modern day, The Eccentric Family (Uchouten Kazoku) presents diverse Kyoto, where tanuki and tengu live side-by-side with humans. The tanuki Shimogamo family was once the head of the entire Kyoto tanuki society, but after the unfortunate death of their patriarch, Chief Souichirou, the family falls into disrepair as his four sons struggle to grow up and regain their foothold in society. This series follows Yasaburou, third son of the Shimogamo family, who inherited his father's idiocy. Having been taught by legendary tengu master Akadama and with close ties to human-tengu Benten, who is both a member of the tanuki-eating Friday Fellows and his longtime crush, Yasaburou's life is complicated.

Quirks and eccentricities abound. Yasaburou's brothers are their own curiosities. Yaichirou, the eldest, is aloof but overreacts to everything. Yajirou, the second oldest, is only motivated when drunk and lives as a frog at the bottom of a shrine well. Lastly, Yashirou, the youngest, works under his abusive cousins but has a knack for creating electricty. Their mother is a theatrical bifauxnen known as the "Black Prince" who's very afraid of thunder. Yasuburou himself disregards tanuki laws and society and masquerades as human most of the time. Despite antagonistic relatives, the Ebisugawas, and the threat of being caught and cooked in the Friday Fellows' hot pot, the family and friends go about life in ways only a bunch of misfits could.

Originally a novel by Tomihiko Morimi published in 2007. A thirteen-episode anime adaptation was created by P. A. Works and aired Summer 2013.Production Directed by Masayuki Yoshihara and character designs by Koji Kumeta, of Sayonara, Zetsubou-Sensei fame.

Second novel (from the planned trilogy) came out in 2015 and second anime season from the same staff aired in Spring 2017.

The Eccentric Family provides examples of: