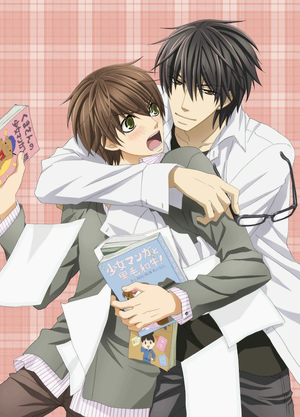 Ah, love. There is truth in what people say that first love is one of the most important relationships in a person's life. For better or for worse.

For Ritsu Onodera, it turned his somewhat sheltered, naive 15-year-old self into an ornery 25-year-old man when his relationship with his first love went sour. After hearing his co-workers badmouth him after managing to pick up a star writer at his family's publishing company (though he had no intent on using his family connections for such a reason), he quits his job to prove he can make a star out of anyone he works with.

However, he ends up working as an editor in the shoujo manga department of his new company, Marukawa Shoten. Having decided that he would quit after two weeks, he goes into his new job with apathy only to find that his new boss, Masamune Takano, is a blunt perfectionist who tells him to leave if he was not going to take things seriously. Goaded by this, Onodera decides to stick around for the purpose of proving him wrong... all the while not realizing that his new boss was actually his first love back in high school.

Sekai-ichi Hatsukoi: The World's Greatest First Love is a Boys' Love manga created by Junjou Romantica's Shungiku Nakamura (the novel part is done by Miyako Fujisaki), which began its run in Emerald in 2006 and is still ongoing. It has also received an OVA and a TV anime adaptation from Studio DEEN, which premiered as part of the Spring 2011 lineup.