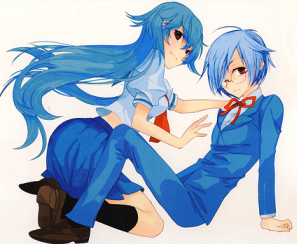 Satou-kun and Tanaka-san - The Blood High School is a Josei manga by Yun Kouga, creator of Loveless. Originally a one-shot published in the anthology magazine Arcana under the title To Cross the River, it was picked up for serialization in 2007 and continues the plot from where the one-shot left off.
Advertisement:

70 years ago, a vampire named Jedaiah was in love with a woman named Fumiko. She rejected him, choosing to marry Saburou Tanaka instead, and the vampire promised to return someday. Now, Fumiko is an old lady with a granddaughter, Misaki Tanaka. She is a high school girl who is a spitting image of her grandmother when she was young. Jedaiah, now going by the name Satou, decides to infiltrate Tanaka's high school on a mission to make her grandmother fall in love with him.

Tropes in Satou-kun to Tanaka-san include: