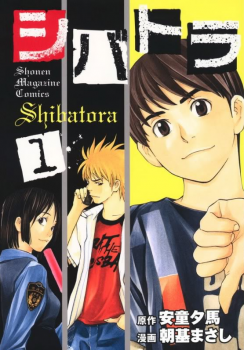 Shibata Taketora is a police detective, working in the Koenji Station Public Safety Department, Youth Division, to bring help and guidance to troubled and victimized teens and children. His credibility is hampered though, by the fact that he looks even younger than most of the teens he's supposed to be policing. But he has powerful assets on his side; a deceptively keen analytical mind, national champion level kendo skills, an apparently supernatural ability to sense when others are in peril, and most important of all, an overwhelming ability to see and bring out the best in the people around him.

Although it tends towards the idealistic end of the scale, Shibatora delves deeply into some sensitive issues such as child abuse, drug addiction, and sexual exploitation, making it significantly darker than most Shōnen series. The series is complete in Japan, and was adapted into a live action drama in 2008.

This series provides examples of the following tropes