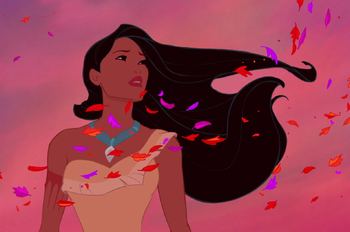 And she also paints with all the "Colors of the Wind" in CGI, too!
"This is why so many heroes and villains wear such long clothing. Because it looks friggin' awesome when it's blowing in the wind."
— The Nostalgia Critic
Advertisement:

Before any fight begins or important truth is revealed, or if the character is simply standing and looking noble, a wind will invariably blow, ruffling his hair, the grass at his feet, and/or his cape if he's wearing one. Invariably the character is either facing the wind head-on (or less commonly, standing perpendicular to it) so that the effect is cool but his hair and garments won't get in his face.

Even if he's indoors.

Some general situations where this occurs:

Protective Pressure is a science-y way to justify this.

A Super-Trope to Hot Wind. Not to be confused with Fartillery, though that combination would be amusing.