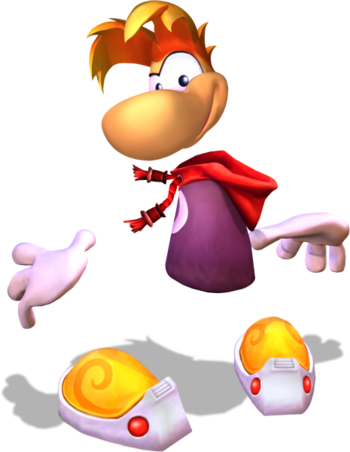 Rayman is a video game series created by Michel Ancel. Rayman is a strange, limbless individual of various origins, who fights to save the Glade of Dreams from a variety of antagonists. While nominally a platformer series, the games are known for never sticking to a gameplay style or setting for more than a game or so, with each title reinventing the series in some major way.

The first game in the series, simply titled Rayman, is a 2D platformer, in which Rayman must defeat the evil Mr. Dark, a sinister individual who has stolen the Great Protoon. Along the way, Rayman must rescue the many Electoons, who have been held captive by Mr. Dark's minions.

The second game, Rayman 2: The Great Escape, is his first 3D title, and the most popular among fans. Darker and Edgier, although still wacky and cartoony, it features an evil group of sinister Robo-Pirates, lead by the Admiral Razorbeard, who enslave the people of the Glade of Dreams and split the Heart of the World - the planet's Primordial Core - into 1000 beads of light, the Yellow Lums. In order to defeat the pirates and restore the Heart of the World, Rayman must gather four legendary masks, which will summon Polokus, who created Rayman's world. This was followed by Rayman 2: Revolution, a PlayStation 2 exclusive remake of Rayman 2, which made several significant changes to the level design and featured improved graphics.

The following game, Rayman M (known as Rayman Arena in the US), was a multiplayer-focused game consisting of racing and battle segments. It introduced a few new characters but it didn't have a storyline.

The third game in the main series, Rayman 3: Hoodlum Havoc, was the first Rayman game without Michel Ancel, and featured a more detailed storyline involving Andre, a Black Lum, who seeks to use the power of the Heart of the World to spawn an army of Hoodlums, hooded mooks shaped like potato sacks. It also employed voices from well-known actors, including Billy West as Murphy (who coincidentally voiced Rayman for the TV show) and John Leguizamo as Globox.

There have also been several handheld adaptations and a Party Game spin-off series, Rayman Raving Rabbids, featuring Rayman's attempts to do battle in various Mini Games with a horde of bizarre rabbit-like creatures. The Rabbids later spun off into their own franchise, breaking ties with Rayman and following its own agenda. A little-seen Rayman CGI TV Series was also made, but only lasted four episodes and was never finished due to lack of funding. However, in 2019, another animated series was announced.

For a while, it seemed like Rayman would be Ubisoft's answer to Nintendo's Mario, becoming its mascot, but the character was all but abandoned by the company once they became one of the biggest international gaming producers and left the whole childrens' market all together, considering that 1.) Ancel moved away from the line-up after The Great Escape to work on other titles, such as Beyond Good & Evil, making the series lose its luster, 2.) the Rabbids themselves stole Rayman's spotlight to the point that he's basically become a minor character (and they would be the ones to meet Mario and his friends down the line, to boot), and 3.) the series was never popular enough to become a cash cow anyway.

However, after years of waiting for news on the state of the next 'proper' Rayman game, one was finally announced in the form of Rayman Origins. While originally intended to actually be a prequel of sorts to the series, it instead takes place sometime after Rayman 2 and combines plot and world elements from the first two games. The game follows Rayman and up to 3 friends (Globox and the Teensies) as they battle through a beautifully detailed 2D world in order to save the Glade of Dreams from the evil Darktoons who have invaded, in a throwback to the great 2D platformers of old. Oh, and the game was developed by series creator Michel Ancel in his return to the series after Rayman 3. The sequel, Rayman Legends, was released in 2013 on Wii U, PS3, Xbox 360, and PC. The series has since returned to a hiatus on consoles, with Ubisoft seeing fit to port Legends to modern platforms including PS4, Xbox One, and Nintendo Switch, while releasing several mobile spin-offs that utilize the same game engine as Legends. However, in 2017, the series' creator Michel Ancel talked about bringing Rayman back to 3D, once he will be done with Wild and Beyond Good and Evil 2. Unfortunately, his departure from the gaming industry in September 2020 leaves the series up in the air.

For the Rabbids games, refer to the Raving Rabbids page.