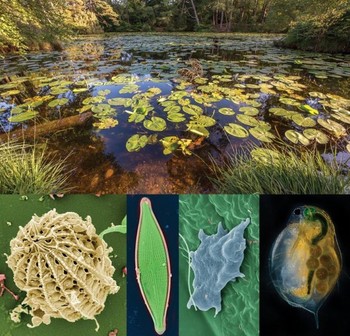 The clear running mountain stream is an iconic image of purity. Think of every advertisement for bottled water you've ever seen. So naturally when our heroes are hiking through the wilderness and they come across a babbling brook, it's time to dive right in and drink their fill without a second's thought right after filling the canteens.

Those of you who are regular campers or have attended any form of survival training know where this is going.

In Fictionland, water that's unsafe to drink will look unsafe to drink. It will be brackish. It will smell bad. There will be dead fish floating on top. Maybe a cigarette butt or used condom if it's in a populated area. So if that mountain stream is crystal clear and Bambi and his pals are all drinking happily from it, then no problem.

Except, of course, for the myriad waterborne parasites and diseases that sicken and kill thousands in the real world. Wild animals have immunity to all sorts of microscopic nasties that humans removed from that environment don't (and they still get sick fairly often). There's a reason water purification kits are standard issue for hikers, campers and survival kits worldwide. Not to mention the billions of dollars governments pour into building and maintaining municipal water facilities and sewage treatment plants.

Also, in some deserts, water that is beautifully clear and fresh looking (i.e., nothing lives in it) may be caused by natural arsenic deposits that turn up in some rocky areas. Drinking water that looks green and mossy and full of gunk may result in dysentery at worst, but drinking perfectly clear death water might just end your hike for good. In the Mountain West of the US or other areas where there is mining activity, cyanide and cyanide-based chemicals can have the same effect, as can pesticide runoff in heavily farmed/agricultural areas. In other deserts, water that is perfectly clear with nothing in it and isn't running may well be irradiated. Different means, same ends. Or perhaps different ends...

This trope is often found in historical fiction, where characters will be shown drinking and bathing in fresh water without a worry or concern. This is especially true of the Princess Classic, whose natural beauty is made only more radiant by the amount of time she spends bathing. Time travelers might also take the opportunity to sneer at the filthy beasts they meet who are simply too stupid to keep themselves clean and too debauched to drink cool, clear water instead of alcohol. All nonsense, of course; people in the old days might not have known about germ theory, but they were well aware that drinking water straight from the stream could cause illness. The reason many people of historical times preferred beer or tea to pure water was that fermentation and boiling were some of the earliest methods of water purification.

Some writers take the trope to eleven and give their special royal characters hot and cold running water and showers. In Norman castles. We'd like to claim that this is more common in fan fiction, but sadly it's a common mistake in professionally published fiction.note To be fair, plumbing is Older Than They Think as it dates back to The Roman Empire. A bath with running water wouldn't be too odd in a wealthy household, but hot water requires servants to boil it the old-fashioned way first, and modern-appearing showers are right out.

It's best to assume that untreated water is unsafe to drink, particularly if it's passed a road, a village, or a forest. There are streams that have been filtered by mineral layers (more in some countries than in others), but generally they shouldn't be trusted without confirmation, preferably from a local who has drunk from it for many years. Even then, those people may have simply built up certain immunities. Even the purest-seeming mountain stream may be tainted with parasites like Giardia lamblia, also known in Western Canada and the US as "beaver fever". No, not even the First World is immune.

See also I Ate WHAT?! and Water Source Tampering. For tropes related to this trope's symbolism, see Heal It with Water and Water Is Womanly.