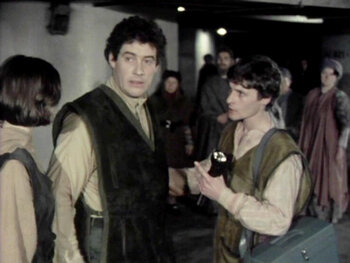 Roj Blake is a citizen of the Federation, and is generally supportive of the government. One day a friend leads him outside the city to a meeting for political dissidents, where he is told that he was one of them, but he had been caught, brainwashed, forced to renounce the dissidents publicly, and then made to forget. The Federation also had his family executed, and the tapes he gets from them every once in a while are fakes. He is shocked and doesn't seem to believe them, so he wanders off, and hides when Federation troopers arrive. The unarmed dissidents attempt to surrender, but are slaughtered.

While reentering the city, Blake is captured and is taken to have his memories altered. The psychologist successfully makes him unable to remember what happened, but those in charge of dealing with him are left with a dilemma. If they let him live, he might continue to be a problem, but if they imprison or kill him, he will be a martyr for the dissidents. They eventually come to a solution, and decide to have him charged with child molestation and sent to a penal colony. The lawyer that is assigned to him, however, notes that the completeness of the evidence is somewhat suspicious, and conducts his own investigation. After finding holes in the records, he sets out to prove Blake innocent.

Blake is put in a holding cell where he meets Jenna Stannis and Vila Restal, a smuggler and a thief, respectively. They are scheduled to be shipped to the penal colony on Cygnus Alpha in about a day, so the lawyer visits him and asks for additional information that could be used to prove his innocence. Blake tells him everything he can remember, and the lawyer takes this information, as well as the faulty records he found to his boss, but discovers that the man is actually a part of the plot himself. He and his girlfriend go to look for the place where the dissident meeting was held, while the prison ship's launch is moved ahead of schedule. The lawyer gets photographs and other evidence from the scene of the massacre, and is rushing back to get a holding order for Blake, but is murdered on the way by a Federation agent. Meanwhile, Blake and the others are loaded onto the prison ship, and as the Earth gets farther away through a window, Blake assures one of the guards that he's coming back.