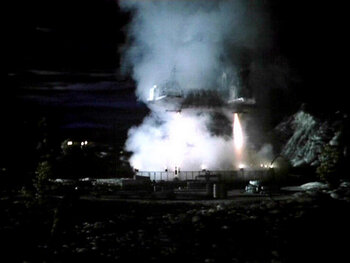 Two people are on a planet, watching the night sky. They are waiting for the prison ship, and see it arrive. On board the London, Captain Leylan sends the incident report for the last episode, and talks to one of the crew about Blake and the Federation's inevitable pursuit.

Blake, Jenna, and Avon discover an armoury, but still can't really operate the ship. The controls are hit-and-miss, but they discover Zen, the ship's computer. Zen is evasive when questioned, so after telling him where they want to go, they explore on their own. They find a teleport system, but all of the Federation's experiments with teleportation were unreliable, leaving them suspicious of its safety. The ship (now called the Liberator) has stopped suddenly, and the crew are surprised that they're at their destination much faster than expected.

The prisoners from the London are released onto the surface of the planet, and lament the conditions before wandering off. The woman seen watching the sky at the beginning of the episode has been sent to retrieve them by a hammy priest.

They can't land the ship, so Blake tries the teleport system. On the surface, Blake is attacked by priests, but brought back to the ship quickly. Blake decides to go back and attempt to rescue the other prisoners. He tells the other two they can leave after an allotted amount of time has passed, and Avon is happy at the idea of deserting him, while Jenna is less certain.

Blake finds the other prisoners locked in a cell, and they are all sick. The priests have given them medicine, but they will need it for the rest of their lives. He tries to convince them to go with him, but eventually gives up and says he'll be back later, at which point he is captured.

Back on the Liberator, Jenna has found new clothes, and Avon is taking apart the teleport console. She points him to a room down the hall, and takes his place at the console.

On the planet, Blake is talking to the hammy priest Vargas (BRIAN BLESSED), who is unwilling to free the prisoners. They talk about power and fear, and the priest reveals he wants the Liberator so he can rule the galaxy. He puts Blake with the other prisoners and threatens them to convince him.

On the ship, Avon has taken a look at the room Jenna directed him to, and discovered a vast collection of valuables. He tries to convince Jenna to leave, because Blake will only waste them. Jenna agrees, but only after the time she promised Blake has passed.

Blake and the other prisoners escape and fight Vargas and his priests. Only Blake, Gan, and Vila survive, but they get teleport bracelets. They call to be brought up, but Avon attempts to convince Jenna to leave them one last time. Blake goes back for his gun, and is unsuccessful, but eventually beamed up with the others. Vargas was wearing a teleport bracelet, and teleports with them. He still has the gun, and tries to take the ship, admitting that the sickness and drug he uses to control his people are fake. He steps back into the teleport and is beamed out into space.

The ship gets moving again, but they are being followed by Federation ships. Avon is pessimistic about their chances of ever truly getting away, but Blake does not want to get away; he wants to fight.