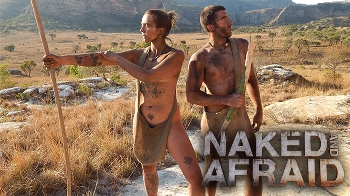 You and me, baby, ain't nothing but mammals, so let's do it like they do on the Discovery Channel...
Advertisement:

Naked and Afraid is an American reality television series that airs on the Discovery Channel and premiered on June 23, 2013. Each episode chronicles the lives of two survivalists—a man and a woman— who are given the task of surviving a stay in the wilderness naked for 21 days. After they meet in the assigned locale, the partners must survive by finding water, food and building a shelter until they journey to reach a preset extraction point.

The show has inspired a Darker and Edgier Spin-Off, Naked and Afraid XL.

Naked and Afraid provides examples of: