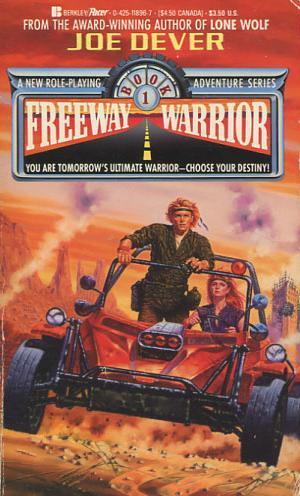 Freeway Warrior is a Gamebook series from the 1980s, but it departed from many of its contemporaries by shunning the typical High Fantasy setting for a post-apocalypse scenario inspired by the Mad Max movies.

After civilization is ruined by nuclear terrorism, the player takes the role of Cal Phoenix, a young man charged with protecting his fellow survivors of "Dallas Colony One" as they make a hazardous journey across the ruins of southwest America, now ridden with outlaw clans and other dangers. Unfortunately, Cal's duty takes a turn for the worse right in the opening moments of book 1, when he kills a clan scout who happens to be the brother of the psychopathic terrorist Mad Dog Michigan, whose allies now control what is left of America's eastern seaboard. Cal has gained a powerful nemesis who will stop at nothing to massacre him and his fellow survivors.

The Freeway Warrior series consisted of four books, and is most notable for having been written by Joe Dever, creator of the Lone Wolf franchise. Despite their different settings, the two series share many rules and similarities.

Not to be confused with Freeway Fighter, which is part of the Fighting Fantasy series.