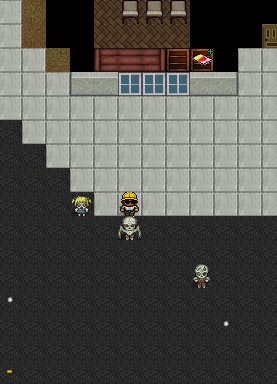 Cataclysm is an open-world post-apocalyptic roguelike in the Zombie Apocalypse genre, although its enemy list also features killer insects, triffids, Giant Spiders, graboids, killer animals, turrets, entities from the Cthulhu Mythos, and probably lots of other things, just to be sure. You're an average person left alone in this hostile world, and your survival depends on your wits and what resources you can scavenge.

While bearing a few similarities to Rogue Survivor, Cataclysm stands out by leaning much more towards the simulation end of gaming than most roguelikes (indeed, most role-playing games, period). Your character's inventory is limited not only by weight, but by the storage volume their clothes provide. Instead of the usual Class and Level System, you learn different skills independently of each other, and they only improve through study and use. The sheer volume of different weapons, food, drinks, tools, clothing, armor, drugs, bionic implants, traps, and just plain clutter in this game is one of its proudest features. Monsters hunt by sound as well as sight, and a single non-silenced gunshot in an infested area can bring a zombie horde right to your location. Perhaps most importantly, the wound system in Cataclysm is very harsh. There are no exploding HP or easy healing in this game - characters can feel pain and be seriously impaired by wounds, and if you have no medicine or first aid skill, you'll probably be making a new character very soon. You can also abuse, get hooked on, and suffer the side effects of a wide variety of non-medical drugs.

Another unique feature is that the game's world map is randomly-generated as usual, but also permanent. New regions are generated as your current character explores farther from their starting point, but it's possible to re-discover regions where your previous characters explored and died.

The game as it exists today is known as Cataclysm: Dark Days Ahead

, a fork of Whales' now-defunct original. Unless otherwise noted, all tropes listed here refer to this version. Although Whales had designs to create a sequel, those plans have been put on indefinite hold (but his blog

still exists, should that ever change).